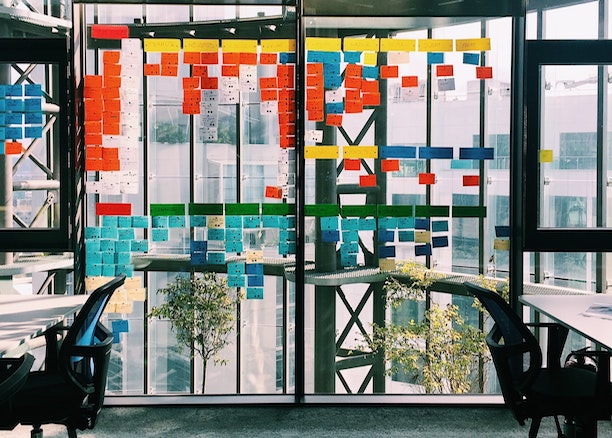 You may have already read our article "What's a Kanban?" (FR) which presents the tracking board that has become emblematic of modern project management. A few columns that tracks the progress of the tasks to be performed, and we move the post-it from left to right. Here! As long as you define what "Done" means, you are in good place for project manager of the year, and your team works 10 times better than before!

Not so fast... The Kanban methodology offers a real solution for a messy or misaligned team, but it is often a little too simple when the project intensifies or the team or the company grows:

For those two reasons, the Kanban dashboard is often only one element of more complete methodologies, including the Scrum methodology. After a little recap in the next section, we'll take a closer look at the all too often overlooked methodological ingredient that makes all the difference (the fact that the work is turned towards the outside). The last section gives you some tips, for using Scrum in Klaro, beyond our Scrum board template itself.

Scrum in a few words

Originally, Scrum was an IT project management methodology. This is probably the most known agile methodology (FR), although there are many others. Scrum is increasingly used outside of software development, as its practices are more universally applicable.

The methodology insists on the following practices:

The magic ingredient behind the Scrum board

If you google "Scrum board" in Google Images your first impression of a Scrum board would be that it is a classic Kanban, with tasks on the post-its and progress columns: 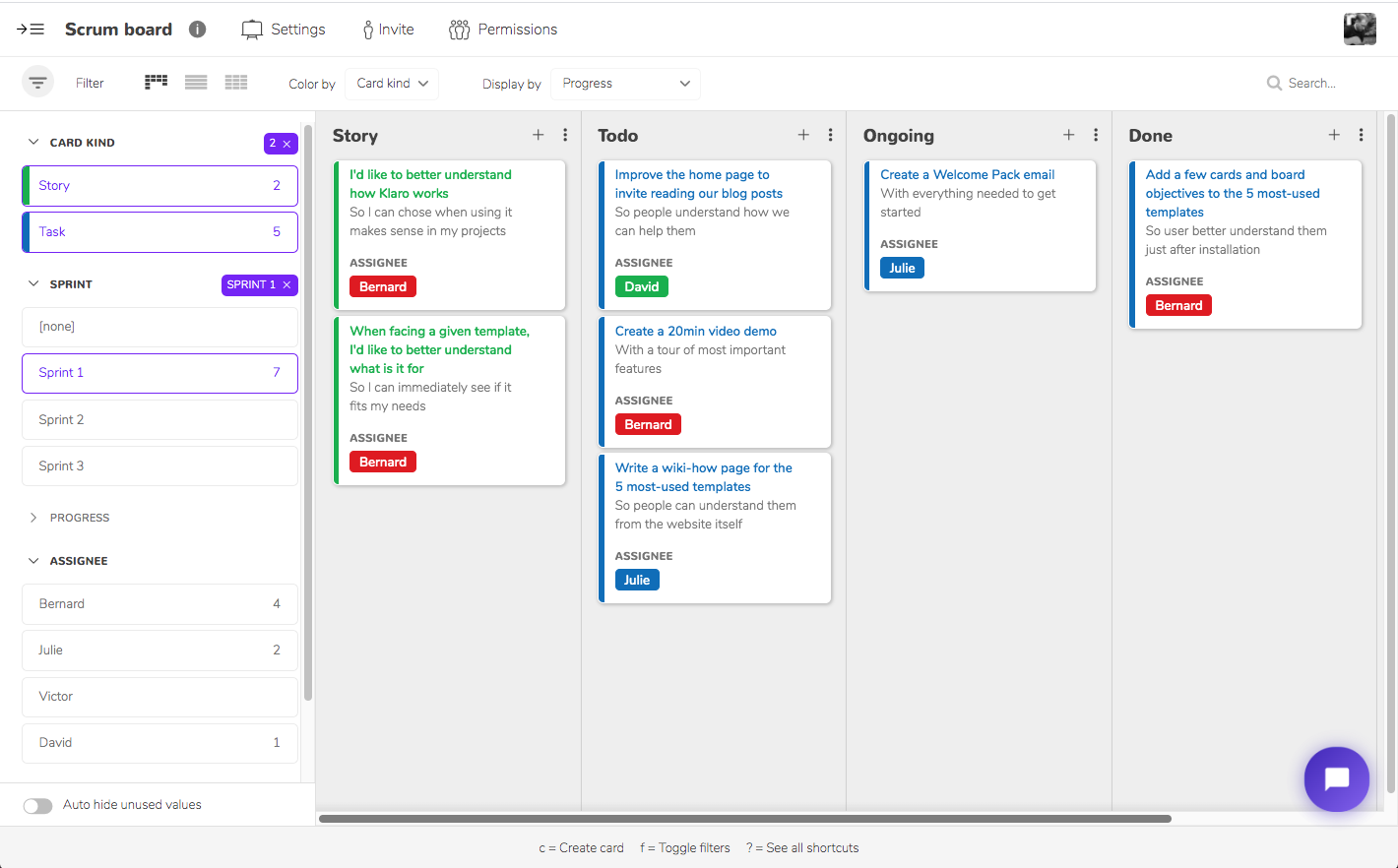 However, the Scrum board has one essential characteristic: within each sprint (observe the filter on the left of the screen) we distinguish the user stories (in green, which remain in the first column) of the tasks of the team (in the progress tracking columns).

Scrum, and agile in general, carry out an essential distinction between :

The usual descriptions of Scrum tend to forget this key aspect of the methodology, to a point that it is not rare to stumble upon "agile" teams, organized in sprints, daily meetings and retrospectives but delivering low added value work because they are not turned towards the outside.

Likewise, it would not occur to you to drive your car while looking at your steering wheel and the gear shift, driving a wide spread project requires to keep your sight on the objective, the client, the destination...

Klaro is not a tool dedicated to Scrum only, it allows to organize teams around principles, in particular the interior vs. exterior distinction. In practice, we can see two major trend emerge.

The first technique, the one proposed in our Scrum board template, consists in distinguishing the * user stories * of the tasks using two different types of cards and creating a link between them, as illustrated below. A Kanban-type board then allows you to display both types of cards, but only move the tasks during the sprint. User stories are only passed to "Done" at the end of the sprint, after verification of the use by the intended end user. 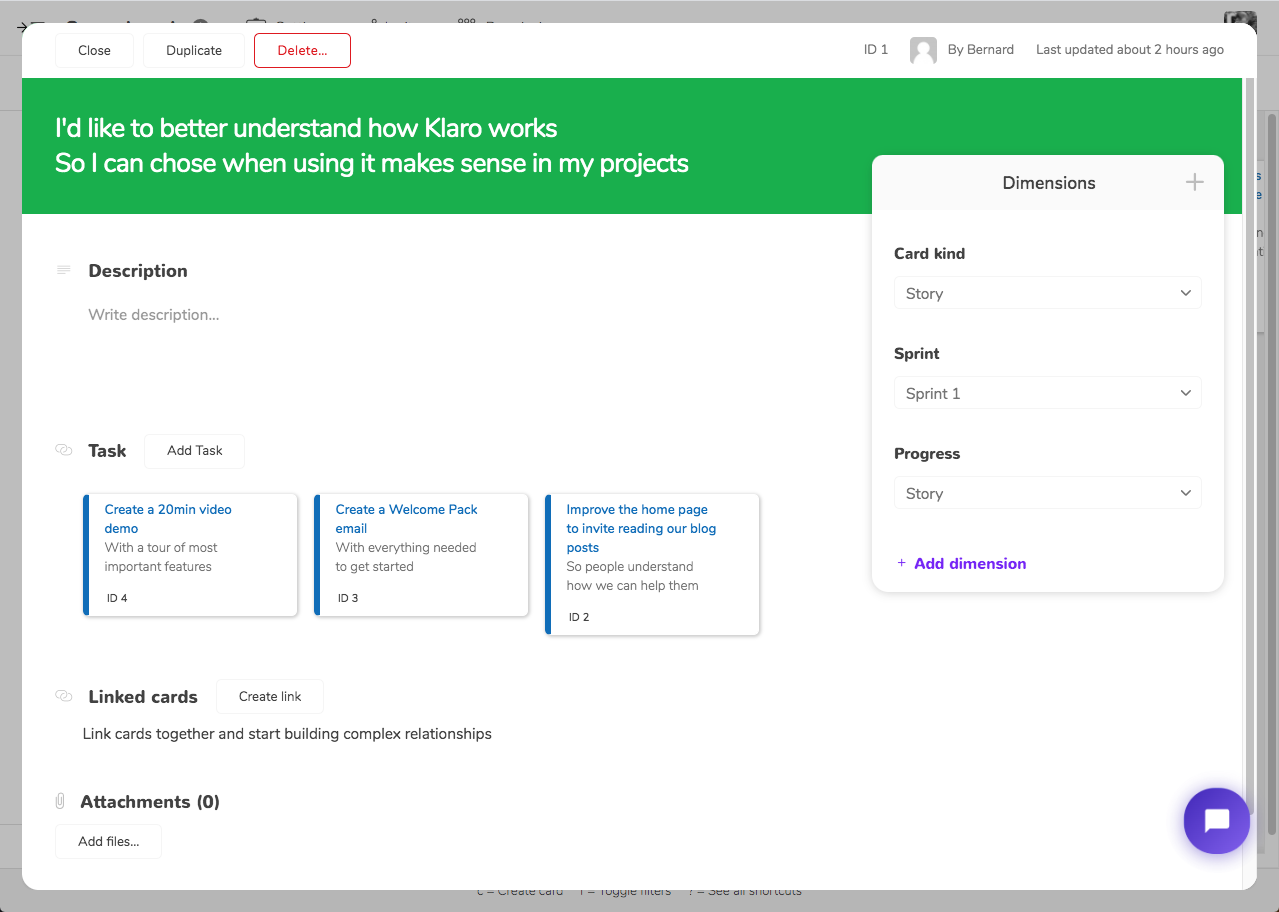 The advantage of this method is that it corresponds to the standard way of doing Scrum, and makes it possible to clarify responsibilities. The tasks are, in fact, distributed in order to be under the responsibility of one member of the team, and therefore remains hers during the sprint. The risk is to end up with too many cards, and not to succeed in converting the try: there can remain a gulf between the tasks carried out and the fact that it offers the hoped-for gain to the user.

A second way to use Klaro, which is preferred in our own team, moves away from Scrum a bit. It consists of following the stories in Todo>Ongoing>Done, without creating cards for the tasks but preferring simple notes in the stories themselves: 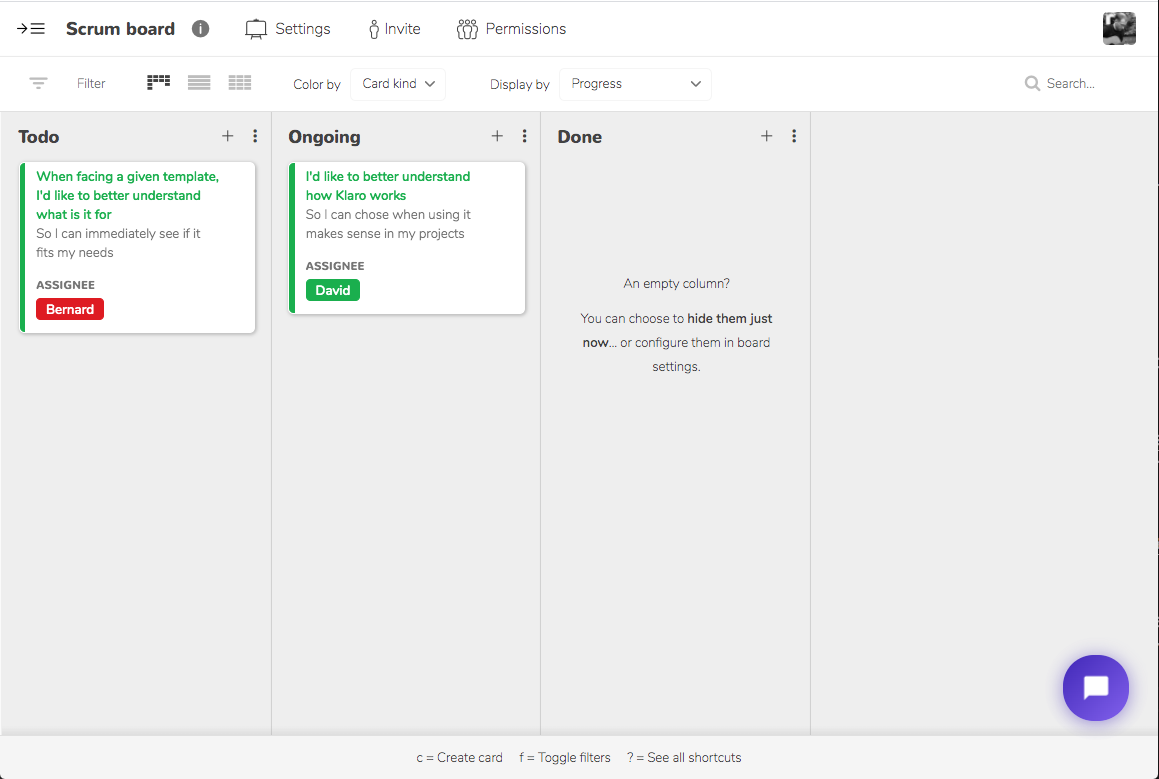 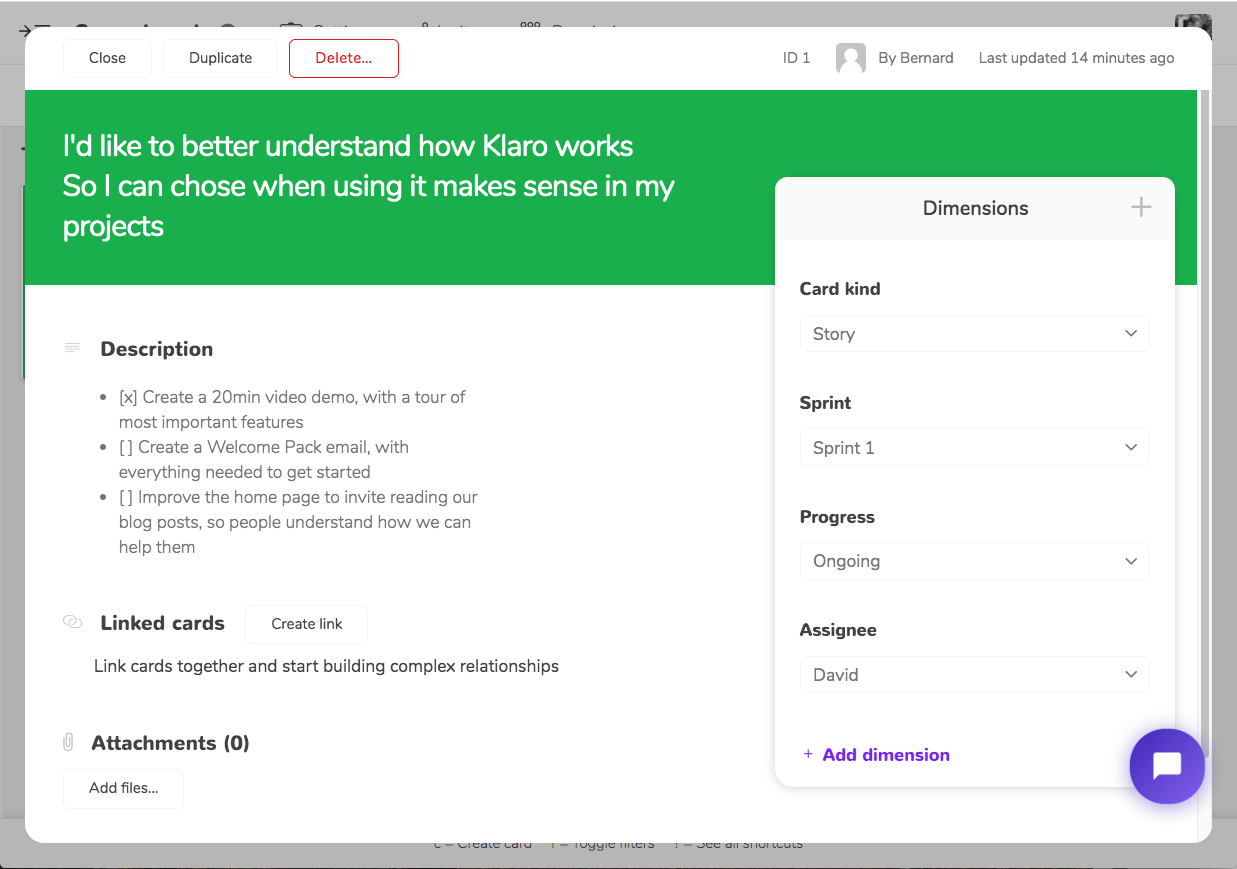 This method has the advantage of avoiding the creation of dozens of task cards and of focusing the team's attention on the value brought to the end user. However, this only works well with an agile-mature team, globally available for the project, and whose results do not depend too much on external factors or people. In such a configuration, a Assignee dimension remains very useful and gradually eliminates the need for a card. As a ball sports team moves towards the opposing team's goal, the person holding the ball is responsible for advancing or making the next strategic pass.

Whatever your preference, decomposition of high-level objectives in bite-size user stories and a sequencing through sprint that demonstrates progress are essential to the success of a project.

These last two topics will be the subject of other articles on this blog, stay on with the help of our newsletter or by following us on social networks.